Hello fellow Morsonians and welcome to the Christmas Eve edition of my weekly news round up of all things Morse related.

Two pieces of news to start with are the the following. Firstly ITV have released a press pack releated to the new series of Endeavour which will start on the 8th January 2017. Be warned that there are spoilers contained within the pack. To get the pack click here.

The second piece of news is that David Bishop has released via Amazon a new revised and updated version of his earlier definitive book on Morse; ‘The Complete Inspector Morse’. The new book, which is for the moment only available as a download on Amazon, includes the three Endeavour series plus some information on the up and coming fourth series. To download David’s book click here.

So onto social media.

The following headline is from the The Sun newspaper on the 16th December 2016.

“BILLIE’S EX OUT OF VOGUE Laurence Fox is unlucky in love again as he splits from model Vogue Williams just months after Billie Piper heartbreak.”

The following is a headline from the website goss.ie.

“Laurence Fox speaks out about Vogue Williams after rumoured split.”

Here is a nice photo I haven’t seen before.

Some photos from the theatre production ‘Our Boys’ in 2012. 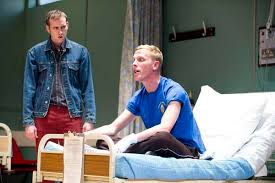 For a review of the play ‘Our Boys’ click here.

The photo below is from Jack Fox’s (Laurence’s brother) Instagram.

To read more on the above mentioned play click here.

Shvorne will appear in a short drama called, ‘Being’ which will air in 2017. ‘Being’ is about a young boy who struggles having a childhood and being a full time carer for his mum with Multiple Sclerosis. Until a new friend helps him live out an old dream.

Sorry for the a rather short post but so many things to do today. Unfortunately my mum is having to spend Christmas in hospital so my son and I are going to visit and take presents and flowers and chocolates. My brother plans to visit her tomorrow. I hope you all have a wonderful Christmas. Take care.