Hello everyone and welcome to my latest review of an episode from the original Morse series. Not only a review but information on the music, art, literary references and locations contained within the episode.

So, without further ado let’s get started.

Chronologically this is episode 19.

Colin is once again a college porter. The above scene is at 25 minutes and 22 seconds.

Written by  Peter Nichols. This was the only Morse episode Peter wrote.

Like many a Greek tragedy this episode has murder, child abduction, passion, loss and the abuse of power.

A Greek chef is killed in his home and then his sister slips away from the Greek interpreter employed by the police to watch over her after arriving from Greece to attend the funeral. What is particularly strange about the sister’s disappearance is that she had brought her baby with her from Greece and has now abandoned him.

This case is made more difficult for Morse and Lewis as they are not only lost in the Greek culture but also the Greek language.

Though this episode has never been in my top ten of favourite Morse episodes it is still a worthwhile and well acted episode.

It’s a rather strange episode because neither Morse nor Lewis figure out who the killer is until the very end. Normally one of the dynamic duo has figured it out well before the credits begin to roll but this time Morse not only nearly arrested the wrong person but needed a full expansive explanation told to him of why the killer was Friday Rees and not Randall Rees. I have to admit I also thought the murderer was Randall Rees too when I first watched the episode.

Personally I didn’t think the motive for murder was a strong one and seemed to stretch incredulity to almost breaking point. However, even when flawed a Morse episode is still worth watching.

It is worth watching for the excellent acting especially from the under-rated British actor Martin Jarvis. I meet him some years ago in a Waterstones bookstore and he was delightful. As with many Morse episodes this episode had some of the best characters actors that Britain had to offer. Jan Harvey also stands out in this episode. She gives a great speech and scene stealing performance near the end of the episode when she is telling Morse, erroneously, why Randall was the murderer.

Another interesting aspect of the episode is Morse’s feelings of being uncomfortable and on edge due to his dislike of ethnic cases as he finds the cultural differences make it difficult for him to read the people he suspects. This discomfort I think is doubled with his lack of knowledge of the world in which Friday and Randall Rees move in; i.e. television. Morse does not only not know the TV personality Friday Rees but doesn’t even own a TV. He can barely work the TV remote and even curses Lewis when he himself presses the wrong button. Morse may know his classics but this knowledge is not helping him solve the case.

Unusually Lewis is also having feelings of discomfort and frustration as he too cannot get past the cultural differences and language. Lewis does his best to keep the case moving forward but lacks inspiration in this episode. However, as so often Lewis does represent one of the funniest lines in the episode when Morse asks him if he has ever seen a Greek tragedy. Lewis replies that he has seen Zorba and Never on a Sunday. Zorba the Greek is a novel and a film based on said novel and a terrible musical.

The direction is solid but rather mundane and lacks the punch and creativeness of director Adrian Shergold’s other two directed Morse episodes “Second Time Around” and “Happy Families“.

Though this episode may be a good addition to the Morse oeuvre it is in my opinion the weakest episode of the fifth series. This fact I believe is borne out emphatically when watched alongside the episode that wraps up the fifth series, ‘Promised Land‘.

There is not a lot of classical music in this episode. Most of the music is incidental based on Greek traditional music played on traditional Greek instruments.

Baroque music is played at 17 minutes and 31 seconds when Morse has dinner at a college and talks to Professor Hogg.

Morse and Lewis are watching a TV show about the the building of an ancient Greek ship in Greece which includes a piece of music by Edward Elgar (Born: 1857 – Died: 1934).

The piece is called ‘Introduction and Allegro for Strings‘.

Morse arrives at the police station in his car only to be meet by Lewis. They drive off to meet Vasilakis. The music being played from Morse’s car is by Ludwig van Beethoven (Born: 1770 – Died: 1827): the 13th Quartet.

I believe the piece of music we hear within the episode is included in the video above.

Well let us start with the title of the episode, ‘Greeks Bearing Gifts‘. The phrase is an allusion to the story of the wooden horse of Troy, used by the Greeks to trick their way into the city. It is recorded in Virgil’s Aeneid, Book 2, 19 BC:

“Do not trust the horse, Trojans. Whatever it is, I fear the Greeks even when they bring gifts.”

Strange is talking to Morse in his office. Morse is explaining that he doesn’t like ethnic cases as he doesn’t speak the language and finds it difficult to read people of different cultures; “Watch the mouth. It gives away what the eyes try to hide.”

As Morse states to Strange the above is a quote from the poet George Gordon Byron commonly known as Lord Byron, ( Born: 1788 – Died: 1824). The quote was apparently made at the funeral of the poet Shelley. The full quote is;

“I can recognize any one by the teeth, with whom I have talked. I always watch the lips and mouth: they tell what the tongue and eyes try to conceal.”

While having dinner at college, Morse is talking to Professor Hogg. Hogg mentions a TV presenter known as Friday as ‘the face that launched a thousand clips‘. This is of course a reference to the famous quote about Helen of Troy (though some scholars believe that Aphrodite was the subject), ‘the face that launched a thousand ships‘. Her abduction by Paris was said to be the reason for a fleet of a thousand ships to be launched into battle, initiating the Trojan Wars.

While talking to Morse, Vasilakis mentions Digby Tuckerman a “man of straw“. This refers a person undertaking a financial commitment without adequate means.

Morse is watching Friday Rees on TV and while she talks about her love and happiness with her husband and their inability to have children, Morse says “I think the lady doth protest too much, methinks“.

The quote is from Shakespeare’s Hamlet though Morse misquotes the actual line.

HAMLET
Madam, how are you liking this play?

GERTRUDE
The lady protests too much, methinks.

After Lewis’s quote from his mother Morse quotes the poet Virgil (Born: 70 BC, Died: 19 BC), “I fear the Greeks even when they come bearing gifts“. The quote comes from Virgil’s poem ‘Aeneid’.

Very little art within the episode and what there is I cannot identify.

On the t-shirts of the staff who work at the Greek restaurant is a design based on an image of the Talos Vase.

The Talos Vase (below) is a 4th-century BC krater now in the Jatta National Archaeological Museum in Ruvo di Puglia. The death of Talos is depicted on the vase. Talos was a giant automaton made of bronze to protect Europa in Crete from pirates and invaders. He circled the island’s shores three times daily.

While Vasilakis gives a lift to Morse after the funeral of Nicos Capparis there is mention of the Elgin Marbles.

The Elgin Marbles, also known pars pro toto as the Parthenon Marbles, are a collection of Classical Greek marble sculptures made under the supervision of the architect and sculptor Phidias and his assistants. They were originally part of the temple of the Parthenon and other buildings on the Acropolis of Athens.

In 1801, Thomas Bruce, 7th Earl of Elgin obtained a permit from the Sublime Porte, which then ruled Greece. From 1801 to 1812, Elgin’s agents removed about half of the surviving sculptures of the Parthenon, as well as sculptures from the Propylaea and Erechtheum. The Marbles were transported by sea to Britain. In Britain, the acquisition of the collection was supported by some while others, such as Lord Byron, likened Elgin’s actions to vandalism or looting. They can be seen at the British Museum in London.

At 41 minutes Morse is talking to Digby Tuckerman. Digby says that this was the time of high-fliers and only the brain dead stay on the ground.. Morse replies, “Never heard of Icarus?“.

In Greek mythology, Icarus is the son of the master craftsman Daedalus, the creator of the Labyrinth. Often depicted in art, Icarus and his father attempt to escape from Crete by means of wings that his father constructed from feathers and wax. Icarus’ father warns him first of complacency and then of hubris, asking that he fly neither too low nor too high, so the sea’s dampness would not clog his wings or the sun’s heat melt them. Icarus ignored his father’s instructions not to fly too close to the sun, when the wax in his wings melted and he fell into the sea. 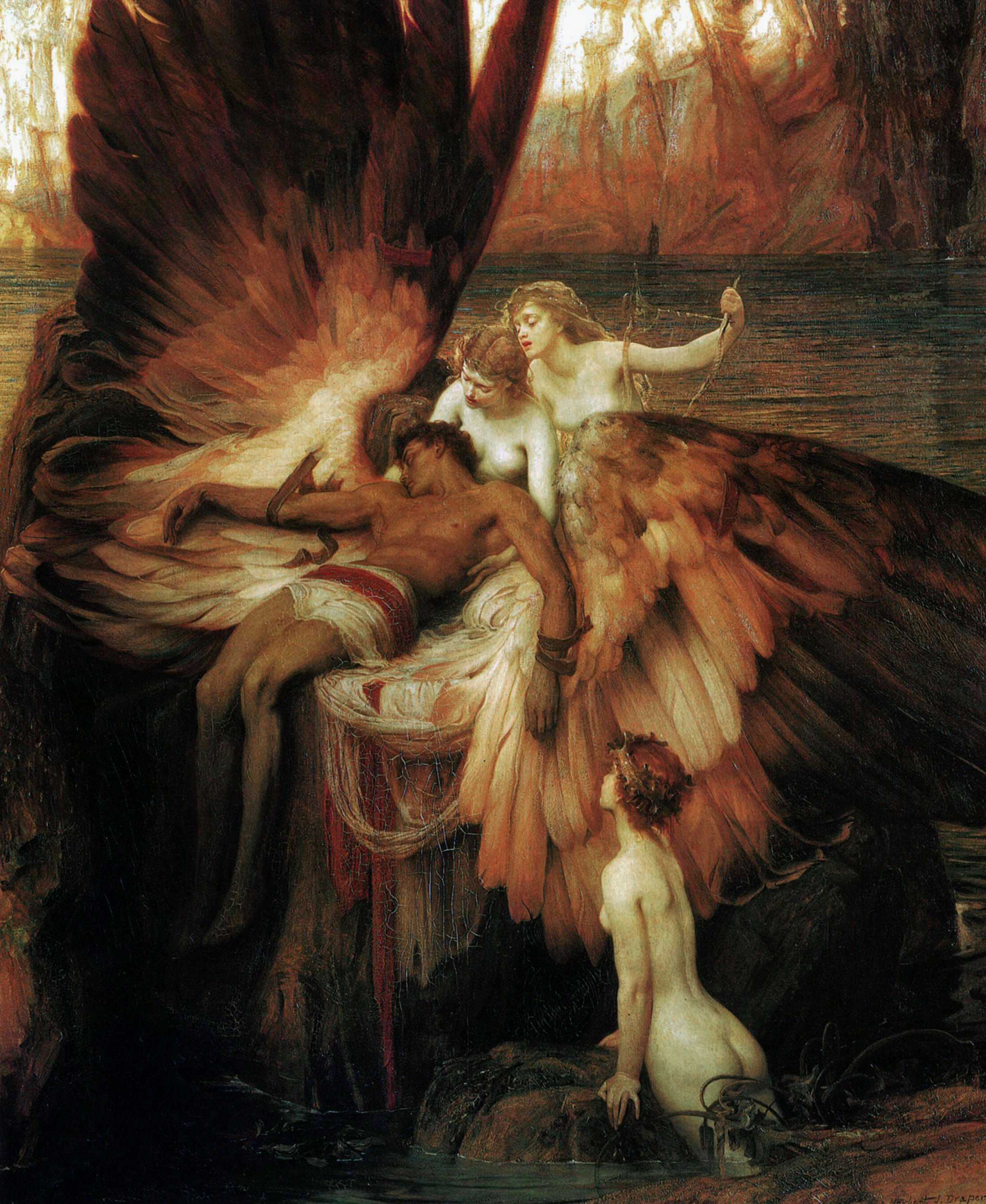 The Lament for Icarus by H. J. Draper

At one hour and 33minutes Lewis learns that Mr Papas saw someone who would turn out to be killer in the street. On the television we see the late great Sid James in the film Carry on Cowboy.

Jan Harvey plays a character called Friday Rees. We learn that the name Friday is a diminutive of Frideswide, Oxford’s patron saint.

Medieval stained glass image of the saint is from the Latin Chapel in Christ Church Cathedral, where St Frideswide’s reconstructed shrine now stands.

This is Magdalen College.

I’m not completely convinced the above is Magdalen College.

This is Magdalen College Library.

Digby Tuckerman is looking for the arrival of Nico’s sister at Heathrow Airport.

The Greek Taverna was based in Summertown.

I believe it was around this area that the Taverna was located.

When the interpreter Jocasta Georgiadis is accompanying Nico’s sister Maria around town she takes her to the covered market in Oxford.

We can see Tower Bridge from Tuckerman’s office window. Of course the above location may not relate to the office. A different location used for both scenes?

Below are two views via Google of Tower Bridge.

Well this is my theory of where Tuckerman’s office was.

The pub is on Horselydown Lane in London.

When Rees is holding his talk and all the students appear bored this is being held at The Oxford Union, St. Michaels Street, Oxford.

Here it is in all it’s glory.

The character of Jeremy Hogg turns up in the Endeavour episode, ‘Coda’.

Jonny Lee Miller as Student. Of course Jonny has gone on to have a great career via films and TV.

Well that is another episode that has been picked clean. I hope you enjoyed this post. Take care.