Aristocratic flummery, impotent husband, pretty au pair, a doting gardener and a jealous chatelaine. It can only be the Morse episode, ‘Ghost in the Machine’.

Welcome to the my new post on the art, music and literary references of a Morse episode. However, in this episode there is very little music or literary references. I’m afraid due to time constraints this week I am unable to finish the art section of this post. So, I thought rather than not posting at all this week I should post a two thirds finished post. I hope you all agree.

Once I have finished with each series I will post a downloadable excel sheet for each category; music, art and literary references. This would allow everyone who downloads said excel sheets to print them off for personal use. Hopefully, having these print outs next to you while you watch the episode will be of help in identifying your favourite pieces of music from all three series. In the same vein the downloadable excel sheets will I hope help in your enjoyment and appreciation of the art and literary references used in all three series.

Of course I am not infallible (I know I was shocked to realise that trait in myself😉 ) so if you should spot an error or omission then please let me know and I will update my post with the new information.

The time of the pieces of music et cetera are based on the British DVD versions of the shows. However, the times shown should not be to dissimilar from other countries versions or should be easy to pinpoint what I am referring to and when.

(Chronologically this is episode 8).

(The times are set as hh/mm/ss, i.e. hours, minutes and seconds).

The first piece of music is played when Morse is returning, by train, from Covent Garden in London. It is from Giacomo Puccini‘s (1858-1924) opera ‘Tosca‘.

This is the final tragic scene when Cavaradossi is killed by firing squad watched on by Tosca.

The next piece is again from Tosca and is heard while Morse and Lewis are driving to Hanbury House. And no it’s not from Cats. 😉

The singer is as mentioned in the episode, Maria Callas but I’m not sure form which section of the opera it is from. I think it is the same as above but i’m afraid my knowledge of opera is very limited. However, below is Maria Callas singing an aria from Tosca.

If you enjoy all the music from the Morse series I have collected all the pieces I have identified thus far and have created playlists on YouTube. On how to access these playlists please read the relevant post by clicking here.

I came across only one literary reference while watching the episode. It occurs while Morse and Lewis are standing on the steps of Hanbury House.

Morse – “You live in a place like this you think the rules don’t apply. Delusions of grandeur. Et ego in Arcadia vixi.”

Lewis – “Oh yes. What does that mean in English.”

Morse – “It means, more or less. there was a serpent even in the garden of Eden.”

‘Et ego in Arcardia vixi’ translates as ‘Even in Acardia I am there’. Acardians were Greeks who lived in the country away from any cities. Their lives were viewed as virtuous, moral and they lived an ideal life. But even they died. I think Morse is alluding to the principle that even in a seemingly perfect setting looms evil, death or a devil.

The title of the episode Ghost in the Machine may refer to British philosopher Gilbert Ryle’s description of René Descartes’ mind-body dualism. The phrase, Ghost in the Machine, was introduced in Ryle’s book The Concept of Mind (1949)[1] to highlight the perceived absurdity of dualist systems like Descartes’ where mental activity carries on in parallel to physical action, but where their means of interaction are unknown or, at best, speculative.

Thank you to Kathleen who noticed this reference; “When Morse enters the attic, he says, “A clean well lighted place.” That is the title of a short story by Hemingway.”

There was a lot of art in this episode and I have done my best to identify as many as possible. The episode was filmed at Wrotham Park, Barnet Hertfordshire. Many films and TV shows have been filmed at the same location: Gosford Park, Jeeves and Wooster, Sense and Sensibility,  Bridget Jones’s Diary etc etc.

The next group of paintings are all contained within the same scene. Lord Hanbury has received a call from the blackmailer and after putting down the telephone receiver he surveys the paintings in his room. The first painting we see is above where he is sitting;

Next we have a group of paintings from the same scene as the camera pans around Lord Hanbury’s study.

The painting marked number one is ‘In the Tepidarium‘ by the Dutch painter Sir Lawrence Alma-Tadema (1836-1912). ( A Tepidarium is a warm room in an ancient Roman bath).

The painting marked number 2 is by the English artist William Etty, (1787-1849). The painting is called ‘Venus and Cupid‘. 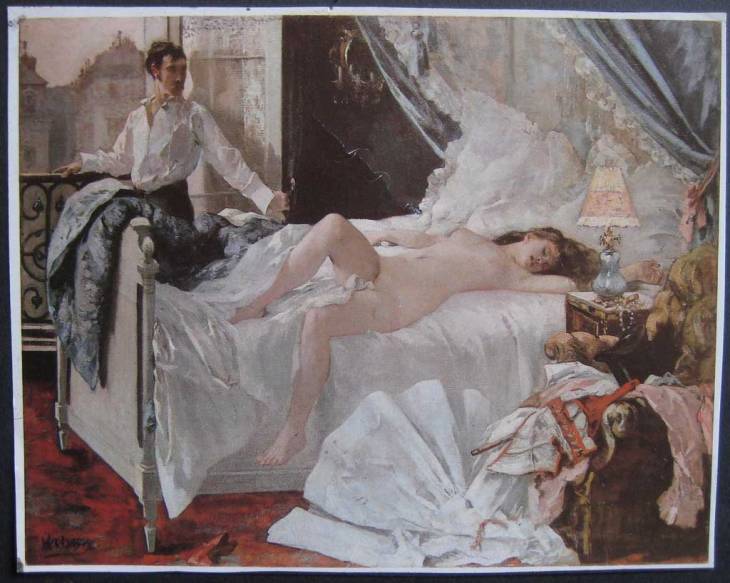 The above painting is called, ‘Venus Disrobing for the Bath‘.

The next three are still within the same scene in Lord Hanbury’s study.

Painting number 6 is ‘Before a mirror‘ by English painter Robert Barrett Browning (1849-1912).

Number 8 is Susanna without the Elders by Frederick Goodall. 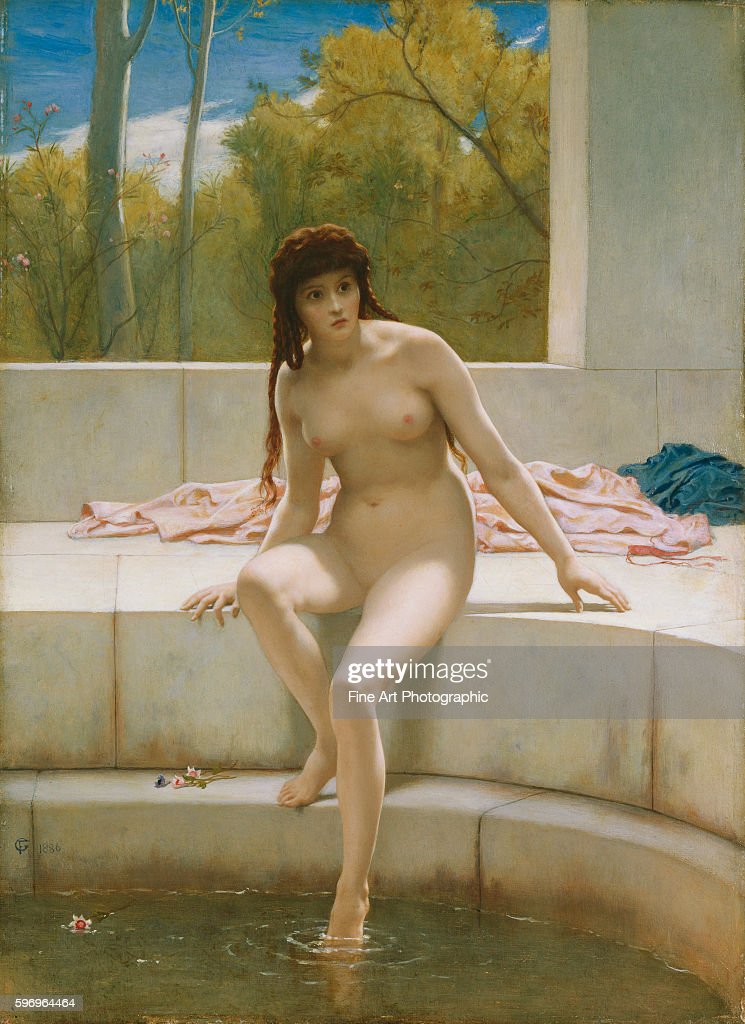 Thank you to Simon for identifying this painting.

Morse asks Lady Hanbury where she was on the night of the so called burglary.

Number one is a Giovanni Antonio Galli titled ‘The Incredulity of Saint Thomas‘. Very little is known of this artist. He was probably born in the 16th century and died in the 17th century. He was a follower of the more famous Caravaggio and was colloquially known as Spaderino (Little Sword).

A continuation of the scene where Morse is trying to establish Lady Hanbury’s alibi.

Number one is a painting by the Spanish painter Bartolomé Esteban Perez Murillo (1617-1682)  titled ‘St. Joseph with Jesus child’.

While Morse waits for Lady Hanbury to produce her train ticket, he studies the Gainsborough

I’m sorry it’s an incomplete post but I hope to finish it soon. Until then take care and thank you all for your continued support.

After having looked after my mum for some 11 years she is now unfortunately in a nursing home. I'm afraid her dementia worsened as did her physical capabilities. UPDATE: My mum died from Covid-19 on the 6th May 2020. So, for the first time in 21 years I find myself no longer caring for anyone. Apart from my mum I was also a single parent to two children and also looked after my dad who had Alzheimers, (he died in 2005). So, I have decided to return to University to try and get another degree this time in English Literature. (My other degree I got some 30 years ago is one in Ecological Science). After a year at college I have passed all grades and now will start Edinburgh University in September 2019. I am now in second year having passed all the requirements in first year. View all posts by Chris Sullivan